I saved this science and exploration activity for one of those nights when the little guy decided that he just wasn't going to go to bed on time. Looking at fireflies in a jar was #21 on my Summer Top 25 Bucket List!

As the sun was setting and the fireflies (or lightening bugs) were just starting to come out for the night, we got out a jar and caught ourselves some bugs! I caught maybe 5 or 6 bugs in the jar before we sat down and really took a closer look. The fireflies were stubborn and didn't want to light up at first, but it didn't matter-- Ethan's 11 month old curiosity was fixated on them running around the jar anyway! 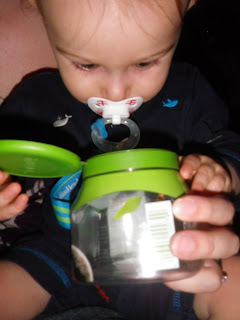 We talked about the bugs and how they lit up so brightly. I held one gently between my fingers so he could take a closer look, and even let him try his hand at holding one. When we were done, we opened the lid of the jar and one by one watched them fly away.

Want to further enhance the firefly activity??
Also, make sure to stop by my previous Baby Science Lesson: Bird Feeder

Posted by Crafting Play at 9:12 AM