This past weekend we planned to go apple picking. We were super fortunate because just that week on Daniel Tiger's Neighborhood we watched the "Fruit Picking Day" episode, so Ethan was really excited when we told him that he was going to go pick apples like Daniel Tiger (Do your kids watch it? Ethan LOVES Daniel Tiger). 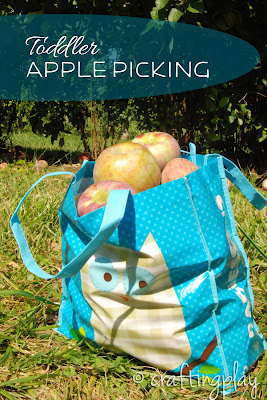 Apple picking was awesome. Ethan loved it. It was a real confidence boosting activity because the apples were low enough for him to pick by himself. He was really proud of his apple picking abilities. I would definitely suggest the activity. So fun. We ended up with a 25lb bag of apples...one of the apples weighed a whole pound by itself! 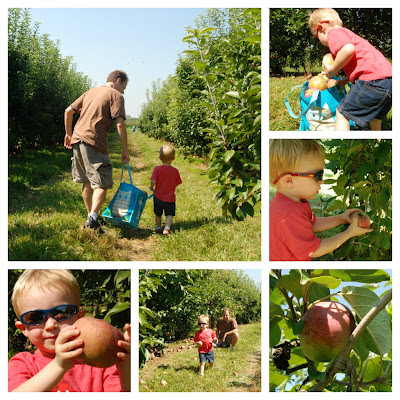 After we got home, Ethan sorted and "played" apple for awhile. 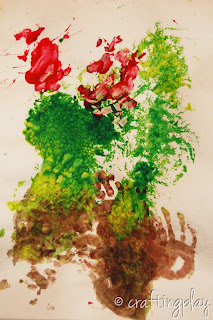 Later that night we broke in our new "studio" in our basement. (I'm so excited to have an art space to work in!) One of the projects that we worked on was an abstract apple painting. We did something inspired by this Scrubber and Cork Stamping Apple Tree on Putti's World. I knew though that I wanted to limit how much direction that I gave, so the project became a bit more abstract. (Because this is an awesome way to discover your artistic self when you're two!) Ethan painted the tree with the dish scrubber. Ethan used a cork to paint the apples. Then I painted his hands brown and we smacked down handprints to represent the tree trunk and branches. I'm pretty sure that the handprints were his favorite part.

The painting was a lot of fun, and was a great wrap-up to our fantastic apple picking day!

There's a funny thing that happens when you're child is in a daycare or preschool program-- Sometimes you think you're going to work on a skill, and you find out that it's one that they've already mastered, without you ever knowing it. And then you're surprised--and proud--all at the same time. 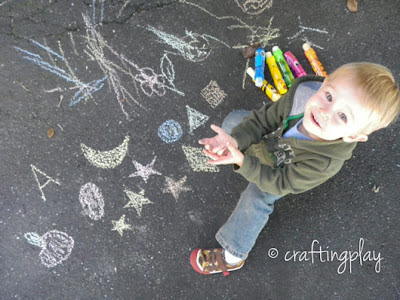 That happened to me yesterday with shapes. I knew Ethan had a basic understanding of shapes. He was playing with sidewalk chalk and I decided to draw up some shapes on the ground and see if he could name them for me. Just the exercise of drawing shapes (letters or numbers) and asking if they can identify is great practice. Of course, because it's chalk on the driveway (or sidewalk), it's suddenly a bit more fun. To my surprise, he named them all, except the oval (I was especially surprised when he came up with diamond). By the time we got to oval though, his general answer was "I don't know." He was done--the activity had come to its natural end. So who knows. The moral of that story is that it's a great activity, but don't expect it to be a long one! I think next time we're going to focus more on letters or numbers.

Shortly after, Ethan abandoned the chalk to collect seeds that had fallen on the driveway. Made me chuckle and reminded me an expereince that Becky over at i'm going to make it (after all) had with a similar chalk and shape activity. 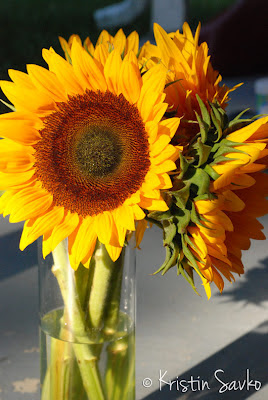 I was given a lovely bouquet of sunflowers as a housewarming gift. So pretty, but now they are past their prime. Ethan however, was not impressed that I was throwing them away. From there, collecting petals was born. 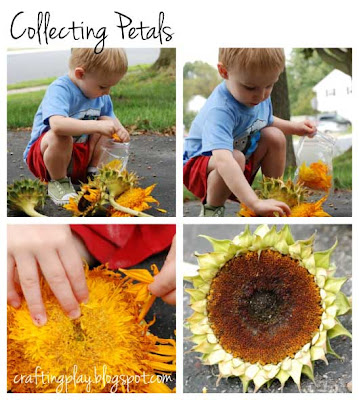 We took them outside where I gave him a plastic bag and let him collect the petals. Believe me when I say, it was a serious hit. Like many toddlers, he really enjoys collecting, dumping and pouring. After the petals were collected he carried them around proudly in his baggie. He talked about how he was going to save them to show to his grandparents and uncle. He was so proud. 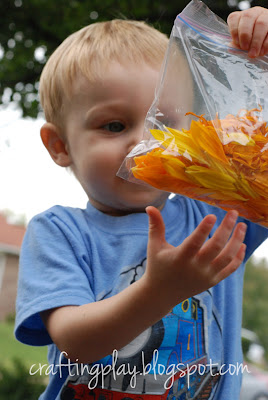 What did we do then?

The whole experience was a great tactile one and a good science related project.

Ethan liked the project so much that the next morning he begged to have the petals off of our one remaining sunflower, and brought his bag of petals to daycare to show his teachers and share with his friends. Long story short, toddler life is rough, and Ethan was told he could get more petals when he got home. But we had no more petals. SO after much lamenting the lost petals, we went to the grocery story and bought a few BOGO flower bunches from the scratch and dent floral section. Really though, I shouldn't have had to pay for them at all..they were in ROUGH shape. Regardless, he thought they were wonderful and spent yet another night picking and
organizing petals.

It was nice to see the flowers enjoyed for one last time. Being such an important part of a toddlers day is a great last hurrah for a flower,
don't you think?

I'd love to use the petals to make a craft. Iron them between wax paper or put them between contact paper sheets, but he insists that their purpose is to be in the bag--fine by me!

Just a warning, you could be in danger of creating a flower petal removing monster...proceed with caution (and fun)!
Posted by Crafting Play at 9:12 AM
Collecting Petals
2012-09-19T09:12:00-07:00
Crafting Play
Learn|Play|Toddler|
Comments 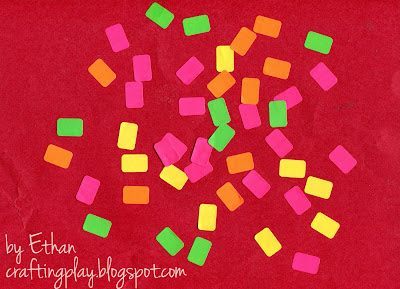 This multi-purpose label collage is actually something that Ethan made at daycare. I just had to share it because it made him so happy to make (he was finishing it when I picked him up) and just turned out so well. They look quite awesome on the red paper too! I especially love the idea of using these labels because they're much cheaper than regular stickers.

I have a ton of similar labels left over from when we created a sombrero for Cinco de Mayo this past spring. Thinking some of these label collages could be perfect for an upcoming road trip that we are planning. 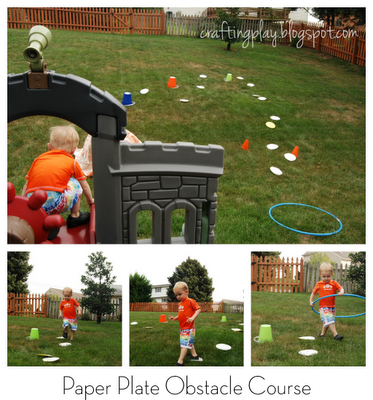 Toddler obstacle courses are great for gross motor skill development and also for practicing problem solving skills. This weekend I made a quick obstacle course for Ethan using a stack of paper plates as the base for the course.

I placed them in the yard and wove them around some upside down sand pails and some plastic cones (left over from our Construction birthday party). I showed him to follow the plates, stepping on each one along the way. I put a hula hoop on the ground at the end of the plates and instructed Ethan to jump into it and jump back out. Also part of the course was his climber (the starting point) and a tunnel made out of a small slide and a blanket (a blanket over a chair would work great too).

The highlight for Ethan was stepping on the plates and following the plate trail. He loved that. After he jumped into the hoop, he decided that he'd wear it on his next lap around the course. Way to go! He also moved the blanket to another location on his climber where he preferred to have the tunnel. It was a lot of fun, although we didn't really get to play for long before the heat and bugs brought the course to a natural end.

We saved the paper plates so we can play again later. Maybe next time we'll create a crawl tube using a cardboard box.

Have you had any experience with toddler obstacle courses? Any other good obstacle ideas for our next course??
Posted by Crafting Play at 9:47 AM
Toddler Paper Plate Obstacle Course
2012-09-06T09:47:00-07:00
Crafting Play
Play|Toddler|
Comments 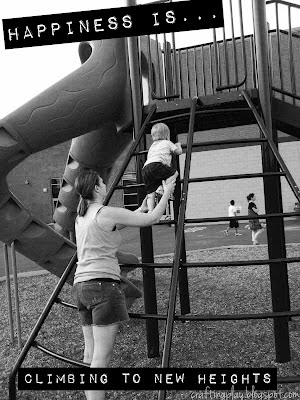 We have a monkey on our hands! He scales the elementary school playground with ease. This was his first attempt...thank goodness Daddy had his cell phone! We still laugh about the giant sticker that says "For ages 5 and up" on the playground support (I really should get a photo of that too).
Posted by Crafting Play at 1:53 PM
Happiness is...Climbing to New Heights
2012-09-05T13:53:00-07:00
Crafting Play
Little Loves|
Comments